One of the things our family is loving about Oslo and Bekkestua (the suburb of Oslo where we live) is that it is incredibly walkable. It is so walkable in fact that we have yet to even rent a car. Instead of driving to school, Maddie and Ada walk to school which is roughly a half mile one way (which means we walk at least 2 miles every weekday to pick them up and drop them off and they walk 1 mile.) John takes the train to the University of Oslo which gives takes him thirty minutes  on the train and then another ¼ mile walk to and from the Physics building. We live within a half mile of four different grocery stores which makes it pretty easy to go grocery shopping once a day to pick up ingredients for dinner that night (which make us walk more but also reduces food waste since we only buy what we know we will eat that day.) On weekends, we’ve taken the bus or train and then walked to festivals, hiking trails, museums, and more. Because of all of this walking our kids are in better shape, we are in better shape, and we are all healthier and happier.

Norwegians when they visit the United States think it’s a little crazy that Americans drive everywhere. A friend’s Norwegian husband even took pictures of a drive-through ATM in the US in amusement because in Norway, there are no drive-thrus. People get out of their cars to walk to a bank or a shop. Another American was telling me today that she lives about ¾ of a mile from the international school and feels like she has to have a good reason to use the car to take her kids to school whereas in the states, that would be the norm. Of course, I believe most of this culture of regular activity has nothing to do with the internal make-up of Norwegians vs Americans. I think it is mostly because Oslo was designed to be a walkable and transit friendly city. Therefore, most people can and do walk and use transit (just like people do in the few walkable cities in the US like DC, New York, Boston and San Francisco).

One thing I have noticed about walking in Norway is that walking is very safe.  When you cross a road at a crosswalk, pedestrians really do have the right of way. In the US at a crosswalk, you wait until a kind driver stops to let you pass, then you cross the road while thanking them profusely for obeying the law. In Norway, if a driver sees a pedestrian even close to a crosswalk, they automatically stop and the pedestrian just crosses the road without thanking the driver. Drivers in Norway are so reliable that it is tempting not to even look to see if they will stop for you to cross because they always do!  Right now, because the sunrises at 9AM and sets at 3PM (!), the country has a huge campaign to get people to wear reflective clothing so drivers can be sure they can see and stop for pedestrians when it is dark.

Not only do Norwegian’s walk more during the weekdays to run errands and get to work or school but they walk on weekends as well. It turns out because a lot of stores close on Sundays, most Norwegian families have a tradition of going on a Sunday walk together. A few weeks ago, we decided to join the tradition by going on a 3-mile round trip hike to a restaurant in the middle of the Oslo Marka Forest by a lake called Tryvannstua. During our walk Maddie and Ada insisted on making fishing poles out of sticks and long grass: 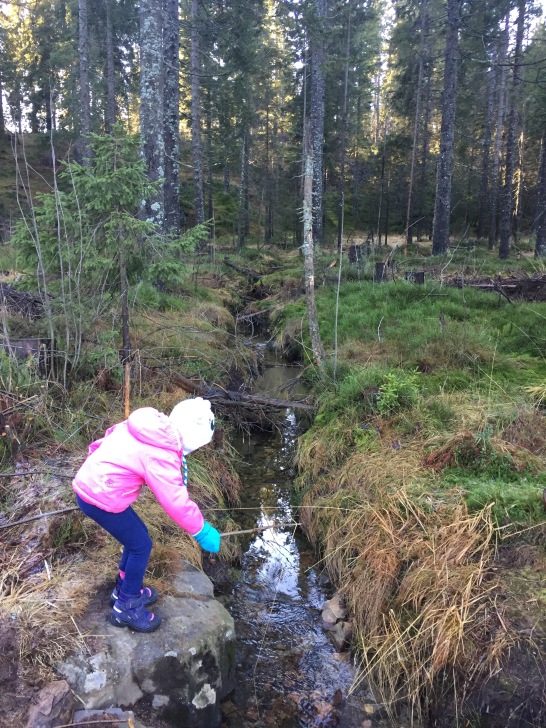 You can see the restaurant peeking out from the woods on the left-hand side and John carrying Ada on his back on the very right hand side:

Ada did walk most of they way but towards the end on the way to the restaurant, we did end up carrying her because John and I were impatient to eat lunch:

Here’s a pic of Maddie in front of Tryvannstua cafe. We had hot chocolate, cinnamon buns (kanelbrød), Norwegian waffles (vaffles) and a prawn sandwich when we arrived.

It was truly a beautiful walk and makes me want to join that Norwegian tradition more often.

Of course living in a city designed to be walkable not only makes our family healthier, it helps us have a much lower impact on the environment (30% of our emissions come from transportation in the US and walking has almost no carbon footprint when compared to driving). Designing a walkable city also makes our society more egalitarian. Why? A walkable city not only benefits those individuals who have the money and spare time to exercise on their own but it also benefits those who might not have the money or time to go to the gym. According to a 2017 study published in Nature which used activity data from the smartphones of 700,000 people around the world, walkable cities help reduce what is called a “physical activity inequality” between men, women and children in a society and the overall obesity of a society. It turns out that the number of steps a woman takes in the day is affected more greatly than a man by the design of the city of where she lives. I’m guessing this is because women are the ones with the least time to go to the gym, and have to run the most errands. It also turns out number of obese people in a country is not correlated to the average physical fitness of the people in the country but instead to the average physical fitness of woman (I’m guessing because when woman live in a walkable city and are physically active so is the entire family.) Therefore, not surprisingly, changing our built environment to be more walkable is not only good for the planet but is crucial to making our society as a whole healthier, happier, and more just. This of course is only part of the reason Norway was ranked as the happiest country on Earth in 2017 by the World Happiness Report produced by the United Nation’s Sustainable Development Solutions Network.

View all posts by dianapburk

2 thoughts on “Walking in Norway”