Things are getting busier, and I’m falling behind on my monthly photo posts, so I’m going to combine two months into one here.

Hanging out at a small pond in Jar, near our house.

In early October, Maddie got a copy of Roald Dahl’s Charlie and the Chocolate Factory. When she first got it, she wanted to read it walking to school. She’s now finished both this book, and the sequel, Charlie and the Great Glass Elevator. 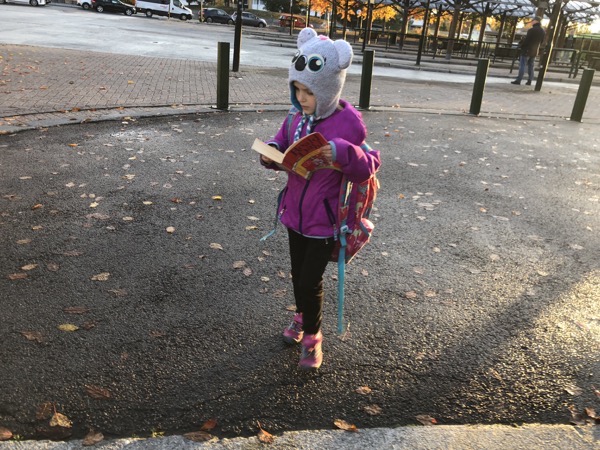 Maddie is also enjoying taking piano lessons after school on Thursday’s. Her teacher likes it when the parent is in the room during the lesson so we can better help her practice during the week. So, often Ada gets to hang out too sometimes playing and sometimes eating a snack at her sister’s feet.

Ada keeps getting better and better on her scooter, and it’s now the best way to make sure we get to school on time. 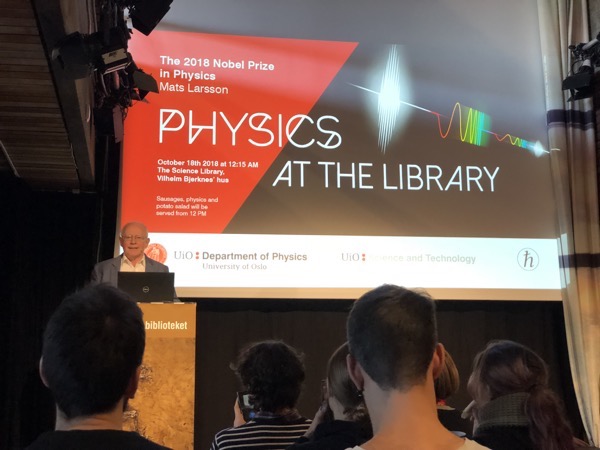 This is the view from the back of the physics building, looking to the west—our apartment is way off in the distance.

Maddie’s class put on a small play sharing the story of Rama and Sita.

Here’s more of Ada on the scooter. This time, it was 51°F outside, and Ada insisted on wearing short sleeves.

For my birthday, we celebrated with chocolate cake from our local bakery and took a trip to see the National Norwegian Ballet perform Manon. Thanks to the generous underwriting of the Norwegian government, our tickets were around $15 each, and Maddie and Ada managed to stay focused for the entire 3 hour ballet.

Afterward, they decided to run around a bit on the Opera House, which is an amazing space right on the water. 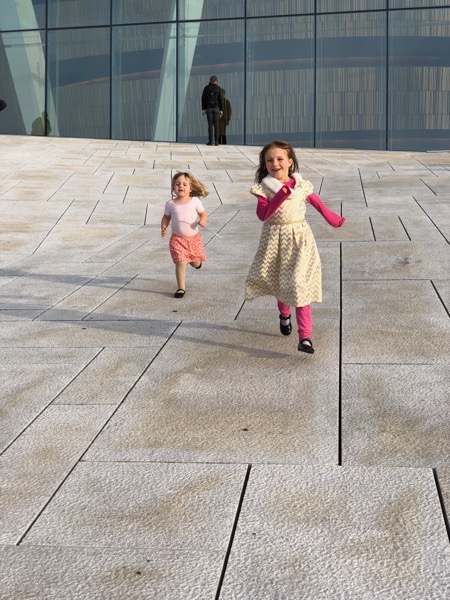 Maddie and Ada’s school celebrated Halloween with Trunk or Treat on October 21st (because their fall week long break fell right over Halloween)—parents decorated their cars and gave out candy and awards for the best costumes. 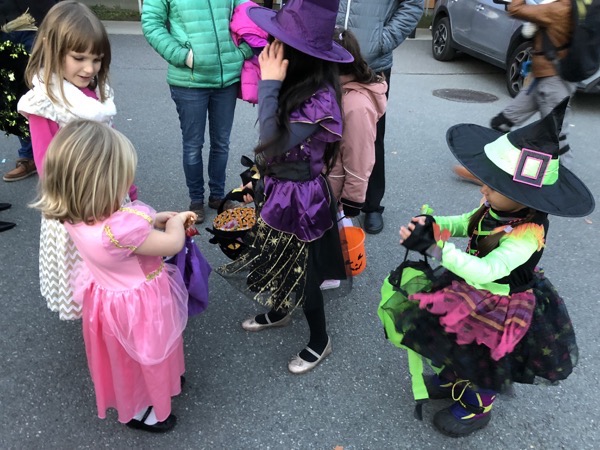 Maddie turned 8 this year, and we decided to have a small celebration at home.

We celebrated Maddie’s Birthday with some friends from Iran, and they sang Happy Birthday in Persian to Maddie.

Ada turns herself into a present.

First snow in Norway—just as we are leaving for London for fall break.

As we were waiting for our flight, Maddie and Ada found a moment for some silly science experiments with static electricity.

In early November, we went to a Kulturhus in Oslo for a day learning about different cultures. One of the activities was building new worlds and making bridges between them. Maddie and Ada chose to make homes out of cardboard. Maddie’s house is the one in the back (and not pink). 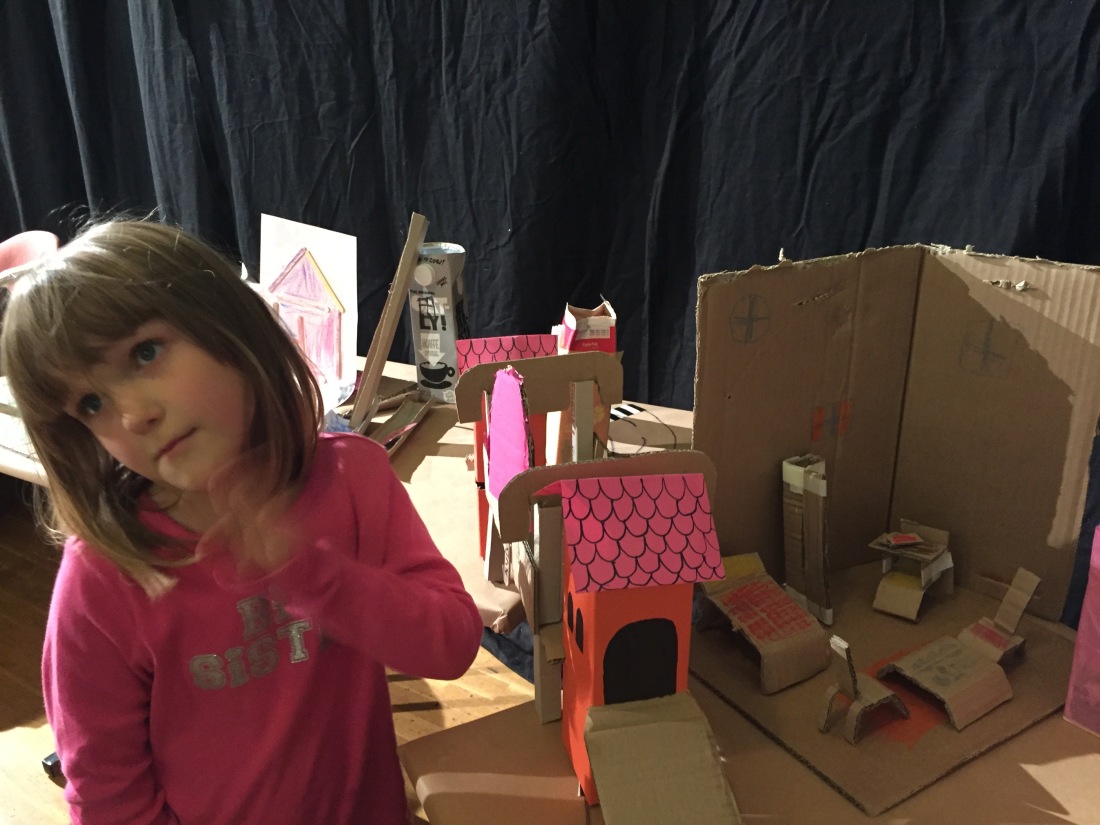 Another walk near our house around Dællivannet (vann means water in Norwegian and is a way to name a lake). That’s Kolsas in the background.

In mid November, we set up a Skype call between Maddie and her class back in Delaware. She had a great time talking to them.

Ada celebrated a friend’s birthday at Leo’s Lekeland, a play space for kids that is loaded with all sorts of climbing and play structures for kids, and plenty of seating for parents to sit and chat.

Here’s a video of Maddie trying to master a rope swing on a playground near our home. This is one of her final attempts after working on it for twenty minutes.

Norway doesn’t really believe in salting or shoveling sidewalks, so it’s not uncommon for walkways to be quite slippery. Not to worry, the local sporting goods store sells shoes with ice spikes, along with detachable spikes you can add to any shoes, and keeps a block of ice in the store for you to test out the traction of your shoes. 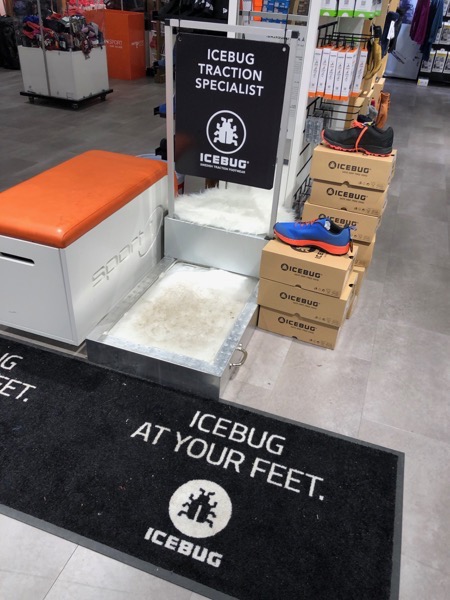