Diana left early this morning for Atlanta. We had a fun time figuring out which of the zillion awesome public transportation options to the airport would be best for her flight, and she settled on the bus that goes straight from our town to the airport in 1 hour and 20 minutes with free wifi and usb charging ports on the bus. As I type this, Diana is somewhere over the Atlantic, and her mom is doing much better–she’s breathing on her own after the doctors managed to remove quite a bit of fluid on her lungs. Please keep your thoughts and prayers coming for her.

By the time Ada and Maddie were up and ready for the day, Diana was halfway to the airport, so they got to chat with mom over FaceTime, while we ate the last bit of food in the house. This meant today would be full of new challenges-we’d need to get groceries for two days, I’d need to figure out how to convince a 3 year old she could really walk down to the town, and much more. I must admit, this morning, I was a bit apprehensive; I’ve taken care of Maddie and Ada for long stretches of time before, but never in a completely new place, without a car, without much in the way of food, and without any understanding of the language. Would we survive the wilds of Norway while Diana is away?

We started off with a visit to Maddie and Ada’s school playground, which put them in a great mood to start the day. 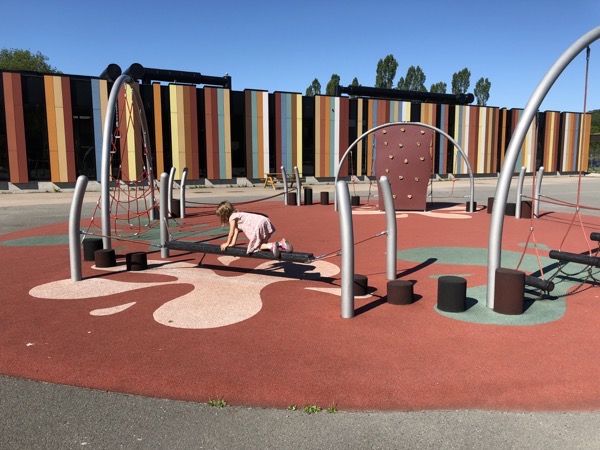 Maddie wanted to make sure I pointed out that she saw her friend’s name here in Norway:

And here’s a video of them on the cutest swing on the preschool playground. HAGS, in addition to being the acronym everyone seems to write in 1st grade yearbooks, is also the name of a Swedish manufacturer of playground equipment.

Just across the street from the kids school is the Bekkestua Public Library, so we decided to stop in and check it out. It’s amazing. Even the simplest of children’s books is beyond my ability to understand at the moment, sadly. But there is a big collection of English language YA fiction, and a modest collection of English language kids books, along with a bunch of wooden trains and other toys that will likely be fun to play with, especially on cold winter afternoons. 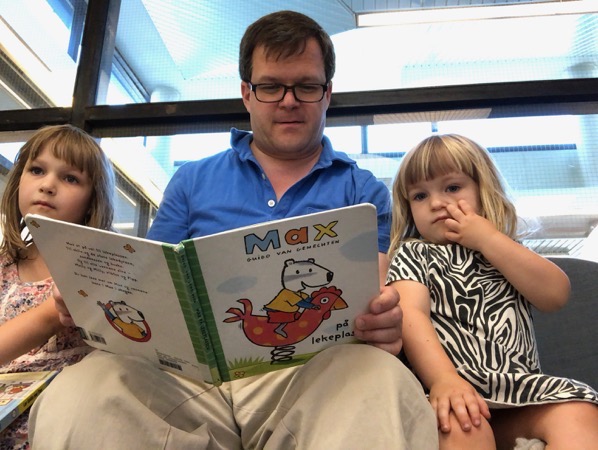 After picking up another pint of strawberries from the farmstand in the center of town, we took on my greatest fear, the grocery store. Yesterday, we discovered that all grocery stores in our town (and all of Norway, I think) are closed on Sundays, so we were totally out of food at home. I needed to simultaneously plan out a menu for the next three days, and keep Maddie and Ada from grabbing everything in sight and loading it into the basket. I’m happy to report that we were successful, though a promise of an ice cream cone might have been necessary. $70 in groceries should keep us well fed until we move into our apartment on Wednesday.

After heading home for lunch, Maddie and Ada rediscovered their Norwegian friends, Nora and Julie, the daughters of our AirBnB hosts. Nora and Julie are almost the same ages as Maddie and Ada, and they had a wonderful afternoon jumping on the trampoline, swimming in their kiddie pool, and trying to communicate with each other when they don’t speak the same language. Somehow, they manage to play wonderfully together, playing games on the iPad, building things with Legos, and running all around the backyard.

Here’s a photo of their swim party. The house in the background is our AirBnB rental.

Maddie has developed a real fondness for our Norwegian friends, and I’ve had a few good conversations with our host. The most amazing thing is that when we move, we’ll be less than 2km from them. Nora and Julie’s schools are right next to Oslo International, so hopefully we will find a way to grow a friendship here.

And that’s pretty much the day. Dinner was salads, some French fries and some bacon and onion hot dogs Ada picked out of the freezer case— Bacon in Norwegian is exactly the same as in English, and Maddie and Ada are addicts—we also have bacon cream cheese for our bagels. Tomorrow, we head back to Oslo to get our residency cards, and then in the evening will hopefully sign the lease on our apartment and figure out how to transport all of our stuff from the AirBnB to our apartment. Our landlord has promised to help, but I don’t think she understands just how much stuff we have.

One thought on “Day 3: A new beginning”