Last week we were so excited to get a visit from Hilary Mead, Terence Gilheany and their daughter’s Hannah and Margaret. Their second night in Oslo, they had us over to their amazing airbnb in central Oslo for a delicious dinner of risotto, chicken, broccoli, green beans, salad and an amazing lemon curd for desert made by Hannah. 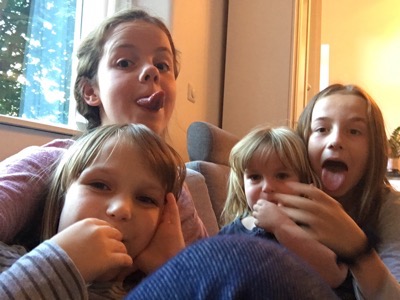 Thanks to John and Terence, we quickly found a private emergency room 10 minutes from us in Oslo and when we left their AirBnB, we lucked out because there was a taxi cab just outside waiting for us. With even more luck, we realized we were the only patients there and we were greeted almost immediately by a patient doctor who gave Ada four stitches to the back of her head while she watched youtube videos on his phone (our phones couldn’t connect to the wifi). Ada, fortunately, was somehow unfazed by the experience and even commented that she liked that doctor and his videos so much she wanted to bump her head again. Maddie who was more anxious than Ada was just glad to get out of there after we tried to pay our $150 bill (seriously- how cheap is that?) (When both of our credit cards were declined the doctor simply told us to come back in two days to pay him in cash. Norwegians just trust each other I guess.)

Unfortunately, the doctor thought Ada also needed a head CT scan to make sure she didn’t have any internal bleeding. After visiting a private place that conducted scans (that said they weren’t set up to do scans children that late in the evening), we headed to the public emergency room in central Oslo which looked just as busy as any emergency room in the states. We took a number at the emergency room and in 2 minutes we got to talk to a nurse who told us that kids under 16 shouldn’t get head CT scans because there was too much radiation involved. After she consulted with a doctor in the emergency room, they agreed we could go home if we woke Ada up every 2 hours for the first 6 hours to make sure she was ok (which she was).

Two days later, we decided to do some necessary errands in Bekkestua by making an appointment with Ada’s newly assigned public doctor (who happens to be the doctor of all of us—adults and kids) to remove Ada’s stitches the following week. We made an appointment for Ada to get her stitches out at 8:30AM on Monday (today) which means we have to leave our apartment at 8:20 because this doctor happens to be literally a 2 minute walk from our front door (yeah apartment!). It turns out if that time was inconvenient we could also have paid a little extra for a private doctor who would do house visits late at night. Getting her four stitches out by the way cost us $8 and we were back in our apartment 20 minutes after we left.

That same day we headed out on another errand. A few weeks prior we had received a notice from the local government that we needed to send the local health center Ada’s vaccine records. Because we are just a 5 minute walk from the local health center (yeah apartment!), we brought her vaccine record there. Evidently Norway has created an amazing system for keeping infants and babies/toddlers healthy. Instead of going to your publicly assigned doctor for well visits (and possibly exposing your kids/baby to the germs from the sick patients) Norway babies go to a well center to get weighed and vaccinated. The health centers also check hearing, vision, and a child’s development. There was a sign posted in the well center that if you were sick, you had to leave, and everyone was instructed to take off their shoes. Ada and Maddie immediately headed toward the small play area for children while we handed the receptionist Ada’s vaccine records. After Ada turns 4 in January, we’ll have to head there again for her well visit. Maddie evidently has already aged out of the system because her primary school takes care of her yearly well doctor visits. All of this is of course free for all Norwegians. Because of this system (and an equally robust system completely free prenatal care and coverage of all costs associated with the delivery of a child), infant mortality rates in Norway were the 5th best in the world in 2017 (only 2.5 deaths per 1,000 live births). Infant mortality rates in the US on the other hand where spending is much higher ranks at 56 with more than twice as many deaths as in Norway (5.8 per 1,000 live births).

All of this is to say that Norwegian health care is incredible—way cheaper and better quality than US healthcare. Also, who knew with a government sponsored health care system you would have more and better choices than we have in the states? I am pretty sure in the states we would have had to wait in a crowded emergency room with Ada and be charged exorbitant fees for the pleasure while in Norway I can choose between a long wait in a free emergency room or no wait in an inexpensive private one. I can also choose between a free doctor chosen for me or an inexpensive one I choose for myself who will come to my house after hours. All of that and I have healthier kids.

P.S. All this talk about healthcare reminds me of the blessing we used to sing growing up before dinner “For health and strength and daily food I give the thanks O’ Lord.” After spending 4 weeks in the ICU with my mom this summer, I am reminded again and again how grateful I am for my family’s health and strength and also grateful that my mom is still continuing to slowly regain her own.

P.P.S. I read recently in A year of living Danishly that countries with better social support systems like healthcare are actually less religious than those that don’t have it. Perhaps they don’t have to pray every day for good health because they know they can count on their government to provide it?

P.P.P.S. Yeah! I (Diana) finally contributed my first post to our blog!