Before I give away the details of our apartment, I need to share the backstory of how we found it. Finn.no is the craigslist of Norway, and every apartment for rent ends up posted there along with a used bikes, skis and a ton of other stuff I’m sure we’ll take advantage of in the future.

Finn.no is a quirky site, there’s a map you can search to find apartments by area, and Google translate does a respectable job of translating most everything on the site, but I’ve learned quite a bit of real estate Norwegian from having to translate the bits that don’t work, like number of bedrooms, furnished, and a few others.

Back in February, I set bookmark to show me the apartments that were new each day, and would then try to write any apartments that met our criteria (2 bedrooms, close to the kids school, not crazy expensive). As it turned out, there are next to no rentals in the town we wanted to live in, and for the first few months, I would never hear back from the owners. A few times, I got emails telling me about the dozen or more respondants, all of whom were likely local Norweigians, with Norwegian bank accounts, so I began to think seriously Norway’s Right to Roam and how it’s free and legal to pitch a tent on the side of the road.

Luckily, in late May, one landlord did write us back to let us know that her furnished two bedroom apartment in central Bekkestua was available for rent. Really, it was a dream come true. We are set to sign the paperwork and move in on Tuesday, and today, while wandering around Central Bekkestua, Diana and I did our best to figure out where exactly our apartment is.

Here’s a panorama of Bekkestua Senter

At first, we only had an approximate address, so we had no idea which apartment was ours, but after looking carefully at the post, we zeroed in on this place: 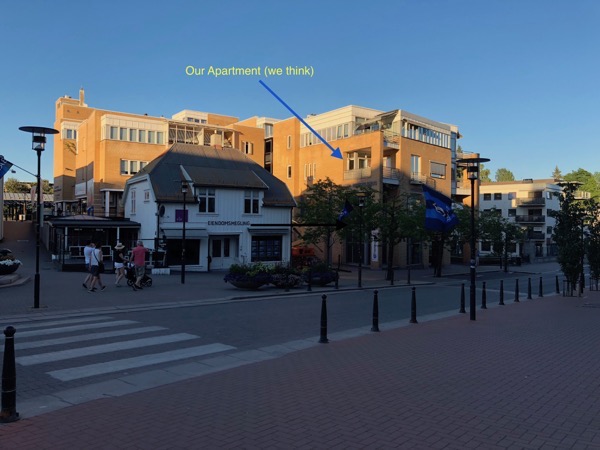 And getting even closer

I’m a bit flummoxed by the meaning of Bekkestua Handelshus. Google translates it as “trading house” and my Google fu seems to indicate this whole building is atop some sort of parking deck. Annen-Etage (Another Floor) is some sort gift and interior store that we will likely never shop unless we find a need for $15 bars of soap or $700 handbags, but the really astounding news is that we are right above a grocery store (awesome), and next to the train station, which means it should take me about 20 minutes to get the University and central Oslo. 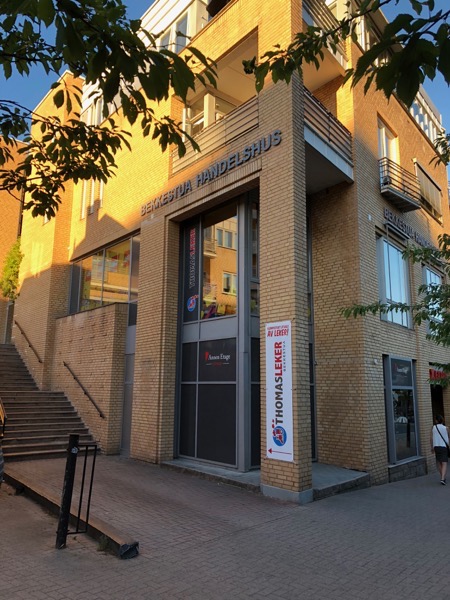 If you look just up the stairs, you’ll see ThomasLeker is TOY STORE.

I haven’t yet told Maddie that she lives next door to a toy store. I’m saving that for the next day or so when she’s missing her mom, but I think she and Ada are going to agree that they’ve found the perfect home for the next year.

If you’d like to do some scouting of our new home, here’s the link on Google Maps. Please report back if you find something cool we should check out.