Skip to content
John Burk Uncategorized June 28, 2019July 1, 2019 3 Minutes
Norway takes its holidays seriously. Even though Norway feels quite secular—2% of Norwegians regularly attend church, and more than half say they do not believe in God. Still, Christmas and Easter are huge deals here—shops close for multiple days, and everyone goes all out to celebrate. We’ve discovered a handful of other holidays associated with Lutheran church—Ascension Day, and Whit Monday that get the full Norwegian Holiday treatment—everything closes, and Norwegians observe the day by going out into nature. But by far, the biggest holiday of them all is Norwegian Constitution Day, the 17th of May (17 Mai in Norwegian). The government begins preparing for this day in early April. As the snow has mostly melted from sidewalks and roadways, they begin a mammoth clean up operation to pick up all of the gravel that is spread over roads and walkways for traction. This is followed by a massive country wide beautification effort tending to gardens along roads and the like. The 17th of May recognizes the day when the Norwegian Constitution was signed in in 1814 after Denmark gave up control of the country, declaring Norway to be an independent kingdom, only to be taken over by Sweden a few months later. A few years later in 1821, a member of the Parliament designed the current Norwegian flags to reflect the country’s close ties to both Sweden (the blue stripe) and Denmark (the red field). 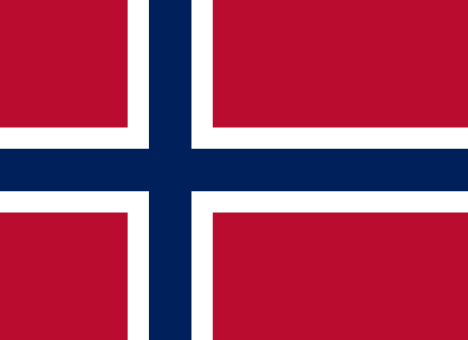 As an aside, I’ve found learning about Norwegian and Scandinavian history to truly fascinating. For much of its history, Norway has been a rather poor country fought over and ruled by its neighbors, Denmark and Sweden, and despite this, was able to negotiate a peaceful dissolution of the union with Sweden in 1905 and a subsequent national vote to invite Denmark’s Prince Carl to serve as king, who changed his name to Haakon VII, a common name for kings in Norway in the medieval ages. Back to celebrating the 17th of May. As the day approaches, it becomes the talk of the office. It’s clear that Norwegians genuinely want everyone to enjoy their National day, and so we got a lot of advice for what to do. The centerpiece of the Norwegian National Day are parades of school children. Every barnehage (pre-school) in Norway holds a small parade where children dress in traditional dress, the Bunad (more about that later), and walk around their school grounds. Older children participate in parades in every town in Norway, with the largest parade taking place in Oslo. Norwegians are very proud that their parades on constitution day feature children, and not the military, and this will inevitably be the topic of conversation at some point during the day with a stranger. Maddie and Ada’s school had an outdoor assembly on the day before to celebrate 17th of May. Here’s a photo of all the children with Norwegian flags.

Ada’s teacher happened to have a bunad in Ada’s size, which she wore when her class celebrated May 17th the day before as you can see in the video below: Not wanting Maddie to feel left out, Diana and I searched on Finn.no (the craigslist of Norway) to find a used Bunad in her size, and I was able to pick it up from a wonderful Norwegian couple at 11pm at night, who took extra time to iron the dress and gave me more tips on what to do the next day. When we woke up on the 17th of May, Ada and Maddie got dressed in their bunad and Diana and I got dressed in our regular causal clothes. We boarded a bus bound for central Oslo (notice that all the buses are decorated with tiny Norwegian flags).

The bus was nearly packed, and aside from Diana and I, everyone was either in bunad, or a suit with tie. This remains the only time I’ve ever seen Norwegians wear a tie—not even on a few formal occasions when I’ve been at UiO is it customary to wear ties. We walked to the Royal Palace grounds so we could see the children’s parade pass by Palace while the royal family dutifully waved to the children. Almost everyone watching the parade was also wearing bunad which was pretty amazing. Below is a pic of Maddie and Ada in downtown Oslo: Here are a few photos from the parade itself: 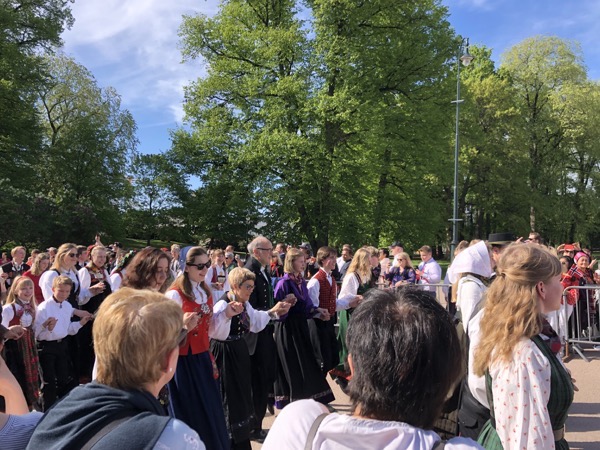 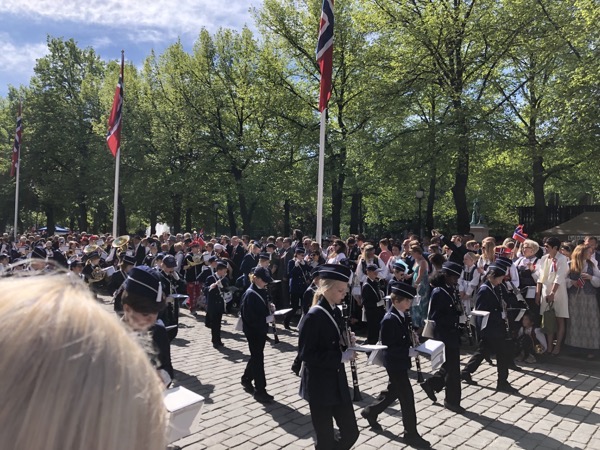 After celebrating May 17th in downtown Oslo, we headed to a friend’s house with other families from OIS, then we joined the children’s parade in Bekkestua which is called “blomstertog” because the children give out flowers (blomster) to the people watching the parade (tog). You can see all of us in the parade around the 29 second mark below: The other big traditions for the 17th of May are eating hot dogs (polse), waffles and ice cream, which I’m happy to say we did in abundance. Truly, this is one of the most joyful national holidays I’ve ever experienced.

3 thoughts on “Celebrating May 17: Norway’s National Day, the greatest holiday of them all”